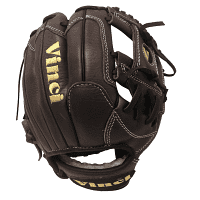 Vinci’s Optimus JV is an 11.5 inch infield / pitcher glove that combines functionality and style for a glove that looks great and kills on the field. Whether you play infield or as a pitcher, this glove is versatile enough to play both positions.

We use the highest quality 6.5 oz. kip leather to construct our Optimus Series line of gloves. Also, we had the kip leather tested gruelingly over two years. You’ll stand out with this glove made of beautiful walnut kip leather and rolled leather welting. This leather has proven to be very durable and provides a unique feel that we think Vinci Pro fans will appreciate.

We utilized leather finger linings and put a solid palm pad in the pocket for beefed up protection from the ball where you need it most. By far, this is the best Vinci Pro Baseball glove series to date, which is why it was named “Optimus,” which is the Latin word meaning “BEST.”

**Gloves with mesh back added feature a Kevlar mesh back for strength, durability, ventilation, and lighter weight.

About The Vinci Family:

Pete Vinci, President and owner of Vinci Pro has been involved with baseball his whole life. He grew up in Westchester County, New York where he also first fell in love with the game. As a young boy, Pete would visit Yankee Stadium with neighborhood friends and family and cheer for the Yankees. Pete started playing little league baseball at the age of five, in fact, this is where he earned his nickname Pete 22, or “double deuce” for the numbers on his jersey. Pete was a star on the baseball field as a result of his fielding and batting ability. Pete’s father, Benjamin Vinci, owned a family business in New York and would often try to teach young Pete about the vinci family business. He would refuse to learn the family business, always saying he was going to be a professional baseball player and would not work in sales.

Pete graduated from high school and enrolled in college, in New York City. After several months in college, he decided that he wanted to volunteer for the U.S. Marine Corps. When Pete left the Marines, he received an invitation to attend a training camp with the Kansas City Royals. Although, this was a great opportunity for him, he declined the invitation and instead decided to help his father, a wounded veteran from Pearl Harbor running the family business.

Pete’s sincere devotion to his family coupled with his love for baseball naturally encouraged him to fuse the two together to create Vinci Pro. Pete developed the first Vinci Pro baseball glove in 1997 that contained the signature of his father, Benjamin Vinci. Benjamin Vinci, an American hero as well as a distinguished veteran, was injured at Pearl Harbor on December 7, 1941 and can be read about on the Vinci Pro website under the Hero’s Tribute. Pete’s hero Benjamin Vinci lived with Lou Gehrig’s disease until his passing on February 13, 2002.

The Start of Vinci

The signature of Pete’s father continues to be a trademark of the Vinci Pro line of baseball gloves. Each model produced in the Vinci Pro line of baseball and softball gloves pays tribute to family and friends to the Vinci family by having their initials engraved as the model numbers in the gloves. The JV model gloves in our Custom Pro and Custom Pro II line of gloves is a tribute to Joanne Vinci, Pete’s wife. Joanne, who was once the girl next door in Westchester County, is now a key executive at Vinci Pro. Mrs. Vinci heads the special events department and prior to that position, has held various other positions as the business has evolved over the years.

Since 2005, Vinci Pro has been under the direction of Pete Vinci as well as his son Peter J. Vinci. As Chief Executive Officer of Vinci Pro over the past few years, he has been an integral player in the expansion and growth of the Vinci Pro organization. An active athlete and devoted son he continues to work alongside his father to improve the Vinci Pro line of products. Initiatives lead by Peter J. include the addition of new staff and sales representatives, along with a national marketing campaign designed to target all levels of players.

Vinci Pro products are designed with the professional in mind, and we have since introduced over 40 gloves making us one of the most versatile distributors of high quality and affordable baseball and softball gloves. One of the best-made gloves on the market, our gloves are hand crafted from the finest US Steerhide and Kip leathers. Due to the overwhelming success in our Limited series of gloves, we have introduced the 22/PC series line of gloves for the price conscious. Made with the same standards as our Limited , the 22/PC series offers high quality, yet affordable fielder’s gloves for the everyday player. We also have our very best, the Optimus series.

We hope that you have enjoyed learning about the Vinci family and wish you happiness and love in all that you do with your family and baseball!